although some people might say this is the worst written Act in UK history which is full of loop holes and basically allows hunts to carry on hunting.

Sadly this weak law is the only law that offers some protection to our wildlife.

Our current government support hunting and allow hunts to continue hunting due to failure to strengthen the hunting act.

what is actually needed is the Hunting Act to be amended & strengthened, loop holes closed and correctly policed.

A kill is a kill and should be without exceptions.

With 84% of the country against this barbaric hunting activity people have to question if our prime minister is totally out of touch with the pubic and is pandering to her hunting sponsors to secure votes.

In 2004 after public outrage regarding hunting, Tony Blair’s government brought this loop hole act in. Some people believe it was written to purposely include loop holes which allow hunts to carry on killing but also to pacify and con the public into believing that there was now a law to protect our wildlife.

Hunts claim they are not fox hunting … but … trail hunting.

Trail hunting is a false name made up by hunts to try and deceive people into thinking they are just following a trail.

The issue of hunting is toxic to any person who openly supports it.

Are MPs failing to protect our wildlife ?

The majority of MPs are against hunting and support the hunting ban not being scrapped (repelled).

although : Are they really just supporting an Act knowing it has so many loop holes thus allowing hunts to continue hunting.

Many people believe this loop hole weak Act was introduced just to pacify the public by Tony Blair’s government knowing full well it would not be policed, thus allowing hunts to continue to hunt while conning the public into believing hunting had been banned. There is growing concern that MP’s are sitting on the fence and failing to ensure our wildlife is protected by law.

Do MPs need to start listening to public opinion and finally vote to get the hunting ban strengthened and loop holes closed. Or are they just turning a blind eye pushing the cruelty that still continues to the back of their minds and ignoring 84% of the public who want a complete full ban.

The public spent years waited for a ban to be put into place and another 15 yrs being being mislead to believe hunting was banned.

The problem with the hunting act

There are a number of problems with the current Hunting Act which could be easy to resolve by strengthening of the Hunting Act.

· Lack of committed enforcement by some police forces.

Can you imagine if all our other UK laws where based on intentional. example : Would murderers, rapists, thieves claim “oops” they didn’t mean to intentionally murder or steal something, it was an accident and get away with being prosecuted.

This to put it in simple terms is what has been happening with illegal hunting.

Intentional : Any hunt who sets out :

* With a pack of hounds trained to kill and follow a fox, deer, hare scent. (ie purposely setting out with killing tools (hounds) which have been trained to follow animal scent).

* In an area with known wildlife. (ie purposely seeking out victims).

* With little control over hounds. (ie knowingly that their hounds will chase an animal).

* with terrier men in tow. (ie with terriers ready to be put to ground seeking out hunted animals taking refuge.

* Illegally blocking roads to prevent themselves being filmed. (ie trying to cover up a crime).

We believe this shows intention enough to prosecute these hunts and they should not be allowed to use the excuse of an accident to avoid being prosecuted. The law should support this.

Hunts must clearly display they have control of their hounds and a reckless clause should be included into the Hunting Act to prevent accidents and lies.

Hunts have had 13yrs to retrain new hounds to follow a non fox based scent but have refused to do this.

Hunts must be held accountable by law for their hounds actions :-

So why aren’t more hunts being prosecuted ?

There have been hundreds of successful prosecutions proving many times that hunts continue to lie, flout and make a mockery of our laws.

But considering there are over 250 registered hunts in the UK (and many more unregistered hunts) who hunt on average twice a week, only a few hundred prosecutions have actually taken place.

In the 13 yrs of the (supposedly) hunting ban the number of prosecutions should be in the thousands but sadly hunts get away with it because the act is not enforced or policed.

There are thousands upon thousands of video evidence posted online of hunts doing their illegal activities which cannot be disputed.

But hunts claim “Oops” it was an accident and hounds will be hounds, we couldn’t call them off etc (i.e out of control) Hunts just laugh about it and say prove it in a court of law, because they know they will get away with it due to the failure of our government and legal system in protecting our wildlife.

This just proves one thing, hunts have no control over their hounds killing and running riot over roads, railway lines, trespassing on land and invading peoples gardens, killing domestic pets.

Hounds are basically dogs but strangely enough hunts are not expected to follow the UKs dog laws. They are allowed to drop their excrement all over the country spreading infections and diseases. Just recently a hunt had to have a large number of hounds destroyed which were infected with bTB.

Hunts are a huge biosecurity risk trampling around the countryside through farmers fields.

Why are hunts getting away with it ?

i.e. the prosecution has to prove “Intent” all captured on video.

What the CPS requires : The C.P.S requires video evidence to show :-

(which explains why hunts and their supporters get away with it and also go to great lengths to prevent themselves being filmed resorting to violence and attacks on any person trying to gain video evidence).

Now considering that police don’t actually get out in the fields to film, monitor or even investigate hunting, they expect the public to deliver this evidence to them … but … If the public try to do this they are arrested on some trumped up accusation usually trespass but later released.

I’m sure you can now understand why the number of successful prosecutions is low.

The only people trying to ensure this (supposedly) hunting ban is being enforced are the public (sabs & monitors) doing the job the police are suppose to be doing.

Sabs and monitors are volunteer members of the public who are attacked on a regular basis, have threats and abuse thrown at them, families threatened if hunts discover who they are, vehicles damaged with no support from the law while they try to gain evidence of illegal hunting. All done for no personal gain except for the love of animals and to protect our wildlife.

Due to the threats from hunting thugs, the public (sabs & monitors) have to keep their faces covered to prevent being recognised which could result in their families being attacked by hunt supporters or their jobs being threatened.

If hunts where hunting legally ?

Some people might say : Hunts have become so use to lying, deceiving, conning the public, law, police etc, they now feel its their duty to do so.. and have made lying the normal because they feel they are protecting their right to kill regardless of it being against the law to massacre animals..

Hunts claim the fox population needs to be controlled. So why are hunts rearing foxes to hunt ?.

What is the public view on hunters ?

Some people might think : These hunting mafia bullies and their thug supporters are nothing more than over privileged, abusive tally ho yobs who feel it is their right to continue to massacre our wildlife just for the fun of killing because the law allows them to get away with it.

Hunts wrongly claim it is a class war.

We can clearly state, Its nothing to do with class, Its all about stopping our wildlife being massacred just for fun.

Fox, deer, hare hunting with dogs needs to be fully banned and the Hunting Act amended to strengthen and close all the loop holes.

There are alternative types of hunting to fox hunting :-

Drag Hunting (clean boot) : this follows a non fox based artificial trail ie a human runner will be used for the hounds to follow (no killing).

Although some people think this still will leave loop holes for some hunts to abuse the law and carry on killing while no one was looking. It’s a shame that fox hunts have given drag hunts a bad name and there’s little trust left.

Mock hunting : This does not follow hounds and no killing. Allows hunts to still enjoy the freedom of galloping in the countryside over jumps but in a safer manner over a pre determined course that can be risk assessed. This would be less damaging to horses, allow the hunts to stay with-in health and safety regulations and encourage more people to get involved without any illegal implications.

Donation rides : This is an organised ride across country and over fences where the rides choose which fences they want to jump and at what pace they choose to finish course. Many hunts organise these to raise money. They do not involve hounds or following a scent. The course/ride is pre determined over the best safest riding country. Jumps can be checked for safety.

After 15 years in operation any law would benefit from a tightening and improvement, and the Hunting Act is not an exception. Although as a law the Hunting Act could be a very good law, the problem is that it has not been properly enforced, so we believe that amendments that improve enforcement are needed. In particular, we are calling for: 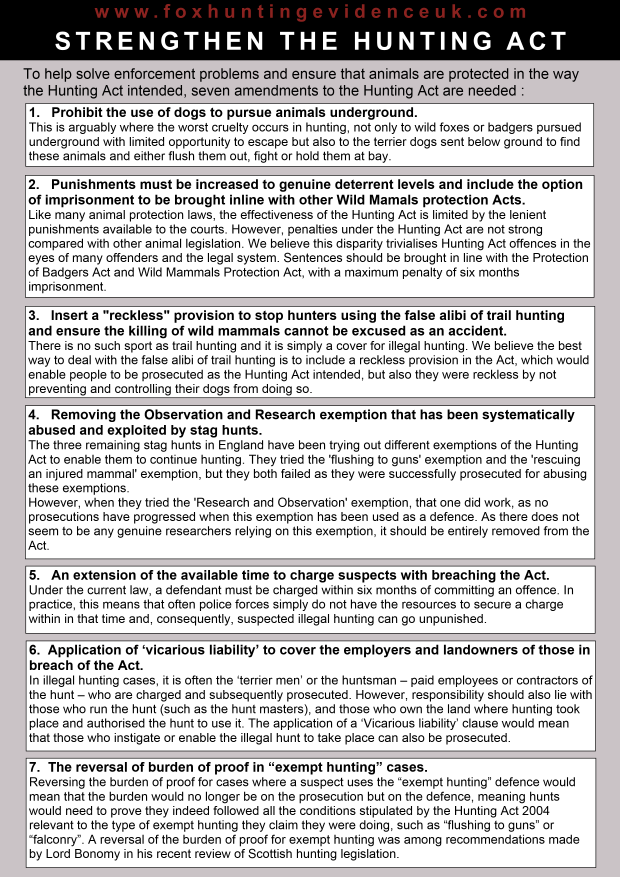 DISCLAIMER: All content provided on Fox Hunting Evidence UK is for informational purposes only. The owner of this website does not accept any responsibility or endorse any statements, articles or views submitted by individuals. We do not take responsibility for pages maintained by external providers. The owner of this website makes no representations as to the accuracy or completeness of any information on this site or found by following any link on this site. The owner of Fox Hunting Evidence UK will not be liable for any errors or omissions in this information nor for the availability of this information. We accept no liability whatsoever over the availability of linked information and we do not endorse any information or opinions appearing in linked pages. The owner will not be liable for any losses, injuries, or damages from the display or use of this information. These terms and conditions are subject to change at anytime with or without notice.
Loading Comments...
Comment
×