If you feel the police are failing to uphold the law or respond to illegal activity, there are certain avenues of complaint to explore if you are not satisfied with the service that the police do (or do not) provide.

HOW TO COMPLAIN ABOUT POLICE

The problem with the current bad state and decline of law enforcement in the UK is that we are currently stuck between three main evils:

(There may be other reasons ie corruption, bias, allocation etc, but we will just stick with the main 3 for now. An excellent article “6 reasons” written by Accidental Activist goes into greater detail).

If a public service has funding cuts, it is often in their best interest to show that the cuts have affected services.

Policing Hunts : Police claim they do not have the manpower or funding to police illegal hunting activity and related crimes. However, there seems to be more and more reason to believe that this could be due to biased policing and the fact that some police forces just don’t like hunt saboteurs; the police presence (or lack thereof) seems to depend on who called them.

Many times, we have witnessed an army of police turn up if hunts have called them, so therefore their excuse that they do not have the manpower or funding seems to be selective.

As there are very few options to raise concerns about lack of law enforcement, it is very important that we keep the police onside in the hope of more positive action. This is becoming increasingly difficult as the public loose faith in the police’s ability to uphold the law.

Antagonising police does not serve any purpose and results in an even greater lack of law enforcement. However, the police must be held accountable for their lack of response to illegal hunting and related crime.

Cases : If the police perceive an illegal activity not worthy of spending time and money on to investigate due to the poor conviction rate then they simply won’t bother. This has resulted from loop holes in the law and judges now requiring the proof of intention to bring a conviction.

While the police still have the public onside and the excuse of lack of funding, this cherry picking of laws will continue to be acceptable even if its morally very unfair and leads to a corrupt system (probably why the Tories love it).

The best way to make a complaint is to contact the police force involved. Police force websites include information about how to complain.

Your complaint should be forwarded to their Professional Standards Department (PSD) who’s job it is to look into your complaint.

Just for awareness : If you are contacting the police to make them more aware of an illegal situation with general information, you may wish to address your letter/email to the Chief Constable.

Once a complaint is recorded, it must be dealt with according to certain rules and guidelines. If the PSD fails to record your complaint, you can appeal to the IOPC.

Local resolution is a way for police forces to deal with less serious complaints more quickly (i.e. it’s a way they can legally just fob you off with a leaflet and no investigation).

For matters deemed more serious, an investigation must be carried out to look into what has happened.

For hunting issues you are highly likely to receive their standard fob off letter. This letter is more important than you think as this then allows you to escalate your complaint further. If you are not satisfied with a response or your complaint remains unresolved, it opens up another door (IOPC) to take the matter further.

So don’t give up or get disheartened by your first response.

Personally, I prefer the matter to not get resolved at local PSD level as it may result in a biased investigation into their own police force. But you do need to go through this initial stage.

If you are unhappy with the outcome of your complaint you can appeal in some circumstances – this could be either to the police force or to the IOPC, depending on how the complaint has been dealt with.

Sad State : We are currently in a very sad state where many crimes are no longer recorded, police seem to be allowed to cherry pick which laws they want to uphold, choose which crimes they investigate to ensure they retain a high performance record, choose which crimes give them the best conviction success.

So minor crimes which are hard to bring about a conviction are often ignored.

Are the police to blame for this, the PCC, CPS, Courts or Government, ? they don’t care as long as they can pass the blame.

The Independent Office for Police Conduct (IOPC) oversees the police complaints system. They set standards that the police should follow when they handle complaints, and investigate the most serious and sensitive matters themselves.

They usually only deal with complaints that have been through the PSD system and resulted in the PSD failing to deal with the matter at Local resolution… or…. serious accusations against a police force.

Their main task is to ensure the police have followed the complaints system correctly.

The PCC is more for a general complaint regarding overall police performance. If enough complaints are received they may organise a county meeting between the public and police where you will get a chance to raise concerns. Expect some fob off excuses. It is best to keep the focus on their failings and ensure you have plenty of backup demanding answers.

The police are highly unlikely to admit any fault in a public meeting unless they can pass the blame off to someone else i.e lack of funding.

Even though the PCC are elected, some people say they are just glorified government budget controller and are unlikely to criticise any police failings as this reflects on their own accountability and budgeting. They are ruled very much by the home office.

PCC’s are elected by the public but are not accountable to the public.

It is the PCC job to ensure the police are held to account and ensure effective policing in your area, so It is important you put pressure on PCC to investigate issues concerning lack of law enforcement for hunt related crimes. Keep sending them lots of evidence photos and videos of illegal hunting activity in your area and questioning what is being done about it.

Remember the role of the PCC is to be the voice of the people and hold the police to account. 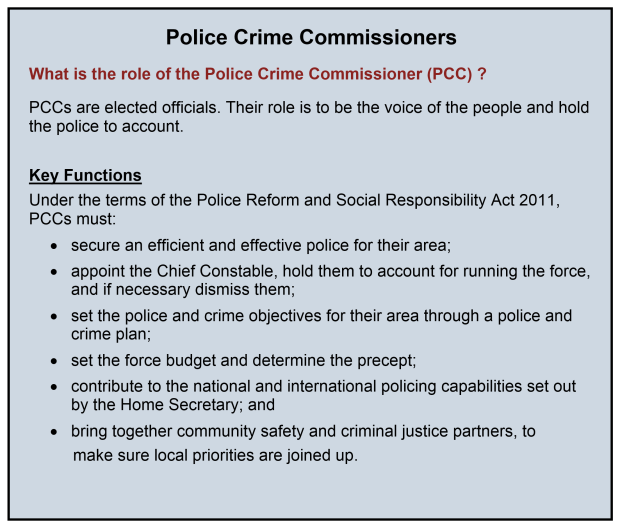 Elections for PCCs took place on 5 May 2016 in England and Wales, but not in London and Greater Manchester. They hold office for 4 years.

Writing to your local MP or Minister can help to strengthen your complaint and raise awareness of hunting crimes. They may get involved with your complaint.

Remember its only pressure on MP’s that can change laws. Remind them if they want the support of 85% of the public who are against animal cruelty and hunting, then its about time they started listening to peoples concerns and ensure the laws of this country are upheld.

Most MPs are notorious for failing to correspond with people. Sending a copy-and-paste automated response to your letter is not an acceptable response. Remind them of this next time they want your vote and keep records of all poor responses.

Just to send awareness information, you don’t necessarily need a response from them, just having the evidence in front of them is enough to raise awareness of illegal hunting and related crimes.

But let’s be realistic, MPs are fully aware of what’s going on and the real truth about hunting and the lack of policing of this crime. But they choose in many cases to not do anything about it unless forced to do so by public pressure, and promises to only do something about it if elected to government. Why aren’t they doing anything about it now ?

Writing to media, local papers/press etc can raise awareness if you can make your story juicy enough for them to take an interest.

You can always give them the evidence and facts to produce their own story.

Media is a way to raise public awareness. The truth and facts need to be constantly pushed out to the public.

DISCLAIMER: All content provided on Fox Hunting Evidence UK is for informational purposes only. The owner of this website does not accept any responsibility or endorse any statements, articles or views submitted by individuals. We do not take responsibility for pages maintained by external providers. The owner of this website makes no representations as to the accuracy or completeness of any information on this site or found by following any link on this site. The owner of Fox Hunting Evidence UK will not be liable for any errors or omissions in this information nor for the availability of this information. We accept no liability whatsoever over the availability of linked information and we do not endorse any information or opinions appearing in linked pages. The owner will not be liable for any losses, injuries, or damages from the display or use of this information. These terms and conditions are subject to change at anytime with or without notice.
Loading Comments...
Comment
×